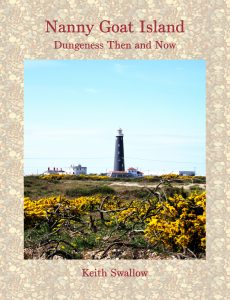 Few forget their first visit to the shingle outpost of Dungeness. To the uninitiated, its stark beauty is totally unexpected in a location only two hours from central London. So much has been said of it that it has become cliched: “unique”; “magical”; “a special place”; “Britain’s only desert”. All these descriptions hold true except for the last – which is no more than an urban myth. But all this would have been totally different had plans to build a vast new ferry terminal, offering the shortest route from London to Paris, come to fruition.

In his third book, Keith Swallow, the author of The Book of Syn and Much Drinking in the Marsh, tells the story of the development of this special corner of Kent, from the early settlers, whose only source of milk was the animals that they kept untethered on the shingle, to the current day. It explores the hardships of those who have earned a living from fishing the waters here, the coming of the railway, wartime fortification, nature conservation, lifeboat and rescue services, the construction of the power stations – and exploding goats!