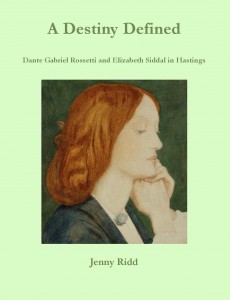 A Destiny Defined, Dante Gabriel Rossetti and Elizabeth Siddal in Hastings, by Jenny Ridd, tells the story of the poet/painter and his muse during their happy days in Hastings, where they were married. It subsequently goes on to consider the later, less happy, times, leading up to Lizzie’s death and eventual exhumation, so that Gabriel could recover the book of poems he had cast into her grave. The author Jenny Ridd and her husband lived at 5 High Street, where Lizzie had stayed and this prompted Jenny’s interest in the couple. The book also includes, together for the first time, three drawings of Lizzie made on the same day by Gabriel, Barbara Leigh Smith Bodichon and Anna Mary Howitt at Scalands, the farm house owned by Barbara’s family.